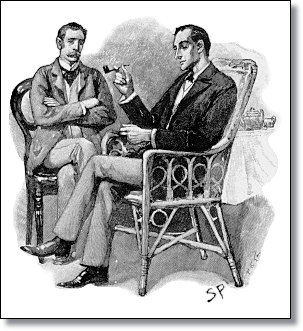 Being a reprint from the reminiscences of

late of the Army Medical Department

‘This fellow may be very clever.’ I said to myself, ‘but he is certainly very conceited.’

Chapter 2: “The Science of Deduction”

‘I keep a bull pup,’ I said, ‘and I object to row, because my nerves are shaken, and I get up at all sorts of ungodly hours, and I am extremely lazy.  I have another set of vices when I’m well, but those are the pricipal ones at present.’

Here I had heard what he had heard, I had seen what he had seen, and yet from his words it was evident that he saw clearly not only what had happened, but what was about to happen, while to me the whole business was still confused and grotesque.

So silent and furtive were his movements, like those of a trained bloodhound picking out a scent, that I could not but think what a terrible criminal he would have made had he turned his energy and sagacity against the law instead of exerting them in its defence.

I have not lived for years with Sherlock Holmes for nothing.

-The Hounds of the Baskervilles

Chapter 10: “Extract from the Diary of Dr. Watson”

‘Good old Watson! You are the one fixed point in a changing age.’

‘It has always been my habit to hide none of my methods, either from my friend Watson or from any one who might take an intelligent interest in them.’

‘I know, my dear Watson, that you share my love of all that is bizarre and outside the conventions and humdrum routine of everyday life.’

‘The ideas of my friend Watson, though limited, are exceedingly pertinacious. For a long time he has worried me to write an experience of my own. Perhaps I have rather invited this persecution, since I have often had occasion to point out to him how superficial are his own accounts and to accuse him of pandering to popular taste instead of confining himself rigidly to facts and figures. “Try it yourself, Holmes!” he has retorted, and I am compelled to admit that, having taken my pen in my hand, I do begin to realize that the matter must be presented in such a way as may interest the reader…Speaking of my old friend and biographer, I would take this opportunity to remark that if I burden myself with a companion in my various little inquiries it is not done out of sentiment or caprice, but it is that Watson has some remarkable characteristics of his own to which in his modesty he has given small attention amid his exaggerated estimates of my own performances. A confederate who foresees your conclusions and course of action is always dangerous, but one to whom each development comes as a perpetual surprise, and to whom the future is always a closed book, is indeed an ideal helpmate.’

‘You know my methods, Watson.’

‘I know my dear Watson, that you share my love of all that is bizarre and outside the conventions and humdrum routine of everyday life.’

In the short story, The Man with the Twisted Lip, Mrs. Watson, addresses her husband, Dr. John H. Watson, by the given name “James.” Sir Arthur Conan Doyle never explains this error on the part of Watson’s wife.

All quotes on this web site were written by Sir Arthur Conan Doyle unless otherwise stated.